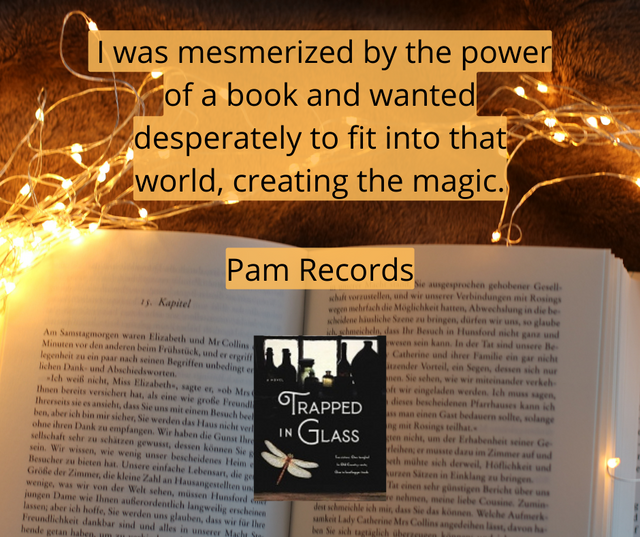 I always wanted to be a writer, even before I could write. I used to take blank pieces of paper and fold them in half to make a book of 16 pages or so and I would take crayons and tell my mom what to write on the page. Then, I would draw the pictures to go with it. I was mesmerized by the power of a book and wanted desperately to fit into that world, creating the magic. I also remember—at a very young age like four or five—I started memorizing the way something looked and the words to describe it so I could later use it in some book I would eventually write. Words and stories were also a grand escape. My mother, a supreme screamer, would be berating me for whatever was my latest infraction, and I would totally block her out, concentrating on the words to describe the pattern on the doorknob or the woodgrain of the door. I took a detour into journalism for my career and have worked for 35 years as a technical writer for marketing.

It was only four years ago when I decided to try fiction. Family members had passed on and I was cleaning out houses and packing and selling some things, keeping some. The immersion of the items from past generations made me decide now was the time to put all of that history into perspective. It was a catharsis and good for settling some old wounds I had held. My two novels take place in the 20s in Hegewisch, a Polish immigrant community outside of Chicago, where my great grandparents lived. The characters in the book are based on them. We spent a lot of time in that creepy house when I was growing up. I was sure it was haunted. My imagination kept me busy on many of the tedious visits as I tried to think of what stories could have possibly led to such pained lives in a horrible house. My great-grandparents didn’t speak English. I didn’t speak Polish. So, I imagined what tales they were telling. And, yes, I used all of that inspiration in the novels.

2. Who was most helpful in your journey to writing a book?

It was a very personal journey. Writing isn’t something you can be helped with, I contend. I did it totally on my own. It requires a personal drive and determination and discipline. I worked on the projects nearly every day in some capacity, from researching to editing. Writing is just a portion of the work.

The classic “show, don’t tell” is a core directive I try to remember in everything I write. And “develop thick skin.” Don’t worry about the random odd comments. Learn what you can from reviews but don’t freak out. Having a book published is a learning process. I try to improve with each book.

4. Let's discuss your book Trapped in Glass. Can you give us a short synopsis?

Set in Prohibition-era Chicago, two Polish sisters, Halina and Patcja, are tangled in bootlegger feuds and their own Old Country roots. Patcja runs The Corner, a neighborhood tavern, in a dangerous (but alluring) alliance with a bootlegger. Halina, a want-to-be nurse, patches up those caught in the street fights. She uses Old Country cures--with a mix of stolen hospital medicine and imported poppy tonic. When a detective with mysterious motives begins delving into buried secrets, the stakes become higher. Whiskey wars escalate, and Patcja's 10-year-old son is injured, defending his mother’s tainted honor. Halina must use her healing skills--and faith--to save the boy. But the injury proves to be Halina's most challenging medical case, forcing her to confront her own weaknesses and deep wounds, before she can save the others she cares about.

5. Is this book based on real people? Who?

The main character, Halina, is based on my grandmother. She was a feisty woman, poker-playing, swearing, stubborn woman who had a mystical/natural cure for everything from a stomachache to a busted bone. She was colorful, to say the least. But she also had a dark side. And in the books, I was able to explore some of the tragedies she faced—which made her the distinct woman she was. And, I really did have an uncle who ran a tavern during Prohibition— in Chicago! Imagine the stories I heard.

6. The book was the winner of the Gold Award for Genre and category: Historical Fiction-Mystery of the year. Tell us about that.

I was so shocked and humbled and truly grateful. It was the most affirming moment in my writing career. I am thankful to the judges and just thrilled.

7. Is there a central theme in the book or a message you wanted to convey to readers?

Resilience. All of my characters faced huge tragedies and hardships and yet they found some ability to persevere and overcome the setbacks. I made them “carry on”—sometimes because they had no choice and sometimes because they were more courageous than I ever could be. I wanted to try to learn something from them. Resilience is a trait I greatly admire, but I terribly struggle with it.

8. Is there another book on the horizon?

Yes, of course. I am addicted to the process. I love sitting on my deck in the summer becoming totally absorbed in another world. I couldn’t stop writing fiction for anything. I am working on my next book, mapping out the plot and defining characters. This one is harder to write. I picked a theme that is more challenging. I thought I was ready to deal with some heavier topics, intense themes and characters that were more conflicted. So, it is taking more planning to present these flawed characters so they can be sympathetic. But—a preview…the main character is a sick girl who lives on her father’s boat and thinks she is a mermaid. Halina is in this book too. And she sets out to cure this girl of her twisted spine—and imaginary world but becomes just as entangled in the mysteries of the boat crew, complete with bootleggers and their henchmen.

9. What makes you unique?

I collect details of nature. I almost always have a rock, feather, petal, leaf, acorn, or bug wing in my pocket. I find and collect small treasures. Dragonfly wings and duck down are my favorites to find.

11. What do you do right before going to bed?

I love watching old reruns of Perry Mason or old movies on TCM. I love staying awake late, drifting off to black and white simplicity.

12. What emoji do you use most often?

A book is a dream you hold in your hands.
—Neil Gaiman
Latest Review: Blue Zeus by Carol J. Walker
Top