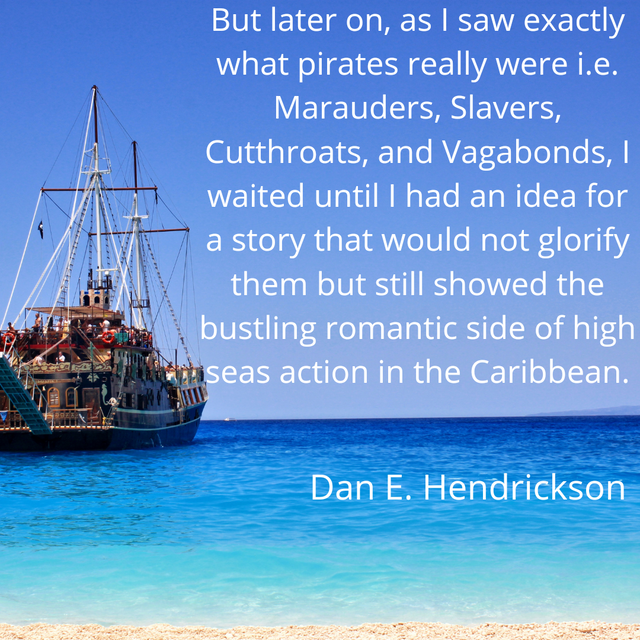 Today's Chat with Sarah features Dan E. Hendrickson author of Brandy, Ballad of a Pirate Princess. You won't want to miss this one, as it's an upcoming book of the month.

I was always telling story jokes in class and my third-grade teacher, Mrs. Newcomer, told me I should write a book.

2. What does success in your writing look like for you?

Walking into a public place like a bookstore or restaurant and hearing random people who I have never met talk about a story I wrote.

3. How do you deal with criticism?

Mechanical criticism I take seriously. Meaning things people find wrong with my spelling, punctuation, grammar, etc. I will do my best to investigate their claims to authenticate their findings and, if they prove to be accurate, accept them with gratitude. But if they are false, then I will point it out to the one who submitted the critique. Criticisms of style, point of view, and flow, I look at and endeavor to learn from but remind myself that it is a matter of opinion and not a hard fact.

4. Let’s talk about your book Brandy, Ballad of a Pirate Princess. Why pirates?

As a boy, I dearly loved books like Treasure Island, by Robert Louis Stevenson, and The Horatio Hornblower Series, by C. S. Forester. Also, I loved the movies made about these books and Errol Flynn’s Captain Blood, The Sea Hawk, and Against All Flags. So, writing about that sort of thing has always been a goal of mine. But later on, as I saw exactly what pirates really were i.e. Marauders, Slavers, Cutthroats, and Vagabonds, I waited until I had an idea for a story that would not glorify them but still showed the bustling romantic side of high seas action in the Caribbean.

5. How did you do your research to make the story authentic, and how much time did you spend researching?

I bought a couple of books about the history of the Caribbean, looked up a lot of specific details about the era like Britain’s Monarch British naval structure and the overall political climate of the British Empire. Also, I investigated the abolitionist movement in the United States at the time and the political socio-economic relationship of Great Britain, The United States, and the Caribbean. Brandy, Ballad of a Pirate Princess took considerably more research to put together than my other books but was quite enjoyable to do and very educating.

Of course, Brandy is my favorite character. My least favorite was probably Governor Bennets.

7. Are there any scenes you can tell us about that didn’t make it in the final copy of the book?

There were no scenes cut in this endeavor. My editor, Tom Hyman, was great about keeping all the scenes in and told me he felt they were all very essential to the story.

8. What’s next for you? More pirates? Something else?

I am working on two books right now. The first is the backstory of one of the principal characters of my The Last Enemy Series, Captain Tommy Williams. In the series and prequels he is referred to as “The Living Legend”, but it is never explained why his associates call him that and why he hates it when they do. In the book, which is titled with that name, I show from his past how he inherited that title. The next book is going to be a Historical Fiction about the Wise Men who visited the baby Jesus after his birth. That book will be called Magi Apprentice.

9. If you were a pirate, what would be your pirate's name?

10. If you could only read one book for the rest of your life, what book would you choose?

Shrek 2 Soundtrack “I Need A Hero”

12. If you could be any animal, what would you choose and why?

A Baldheaded Eagle, soaring so high I can see everything and when I want it, just swoop down and get it.
A book is a dream you hold in your hands.
—Neil Gaiman
Latest Review: Blue Zeus by Carol J. Walker
Top

The book is amazing! Thankyou for the interview.

I haven't read the book, but this interview as peaked my curiosity as to what your book is about. It's wonderful to hear that as a writer you take mechanical criticism quite seriously. I know I made quite a few language errors in my writing when I initially started writing, but am slowly starting to improve with time. Not to mention, it is extremely frustrating to read a book that has a great storyline but just too many mechanical errors that inevitably ruin the entire reading experience of the book.

I think congratulations are in order for taking the time to do an extensive investigation into the history of the Caribbean and the era, which the book's storyline is set in. This is a great feat as some writers neglect this, resulting in their books occasionally lacking with regards to the historical context or language use when it comes to historical fiction stories.

Knowing that the author put in such a great amount of time and effort in writing their story as well as the fact that the story is not merely another story on appraising pirates and all their wrongdoings, I'm truly hoping to read this book soon.
Latest Review: Toni the Superhero by R.D. Base
Top
Post Reply
4 posts • Page 1 of 1