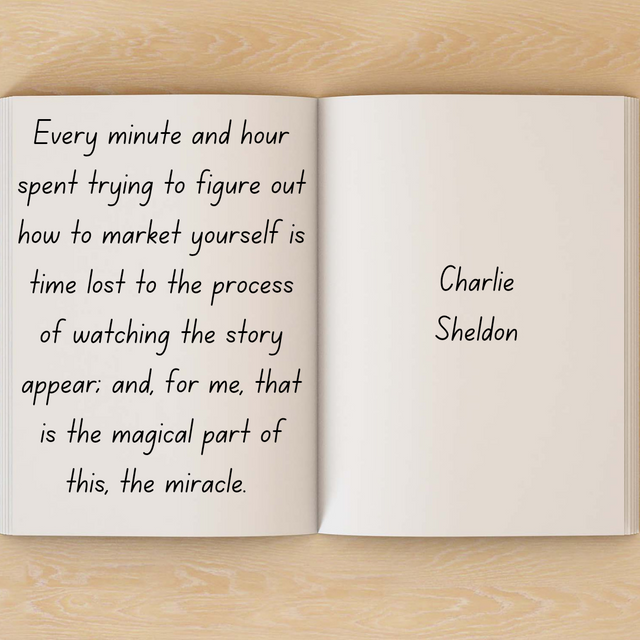 Today's Chat with Sarah features Charlie Sheldon author of Totem, an upcoming book of the month. The book will come out in October of 2021. If you're disappointed, you can read his other books in the meantime. He's written Strong Heart and Adrift, both previous books of the month.

To view Totem on the OBC bookshelves (and to get to Mr. Sheldon's other books), click here.

1. How did you get your start as a writer?

I have always written, since my earliest memory. If you mean, how did I get my start as a published author of novels (after several unsuccessful tries), I was lucky; I knew Paul Kemprecos, who has written many books starting alone then joining with Clive Cussler, and before he partnered with Cussler, he had an agent whom he referred me to. I knew Paul from the days when he was a reporter for the local Cape Cod paper and I was a fisherman. The agent took me on when I sent her a manuscript, and that is how I "became" a writer.

I wrote my first book Fat Chance on the train going to and from work in New York City in the late 1980s, and when I moved to the Seattle area in 1990, I ended up a ferry ride across the sound from work, and I used the ferry to write as I had the train. I would write longhand and later with a clunky very early writing pad, on the boat, 30 minutes each way. It is amazing how fast a novel can appear that way - three or four months? But then I need about two to three years to get it right afterward. Nowadays I write at home or anywhere; these new laptops make it easy. Usually, I write in the morning, when I am writing, but have over the years worked anywhere. I wrote the first half of the first draft of Totem on a ship in Baltimore, and I would write ten minutes at coffee break or after dinner in my cabin.

3. What's your best piece of advice for other aspiring writers?

Write. You will suffer. Things have changed so much since I started. Now with the vast expansion of self-publishing and the web, and the monetization of everything, and nearly every message getting some kind of sales pitch, it is almost impossible to, well, write well. And the whole process of writing, creating something, a real story, is totally different than the process of getting it out into the world, marketing, promotion. I have been to a couple of writers' conferences that used to have "pitch" sessions for authors, all of us desperate to be noticed, and I hated it, so stopped. Every minute and hour spent trying to figure out how to market yourself is time lost to the process of watching the story appear; and, for me, that is the magical part of this, the miracle. I believe every hour you spend in that creative place is an hour not charged against your time on earth. May you have many of them.

4. Let's talk about your book Totem. Can you give us a bit of a synopsis?

It's the third book in a series. It can be read alone—as can Adrift, the second book in the series—but of course, it is richer, deeper, to start at the beginning. The overall broad tale explores a conflict between some local families and a proposed mining operation in Olympic National Park, but these are also stories of coming of age, survival, and great mystery. Something happens to Sarah Cooley in the first book that is impossible, and maybe a dream, or a memory, or...true? This same thread goes through all the stories, which have at their core magic realism and ancient truth. Strong Heart was both a wilderness story and a sea story. Adrift was mostly a rip-snorting sea story. Totem is mostly a wilderness story, again, with a little sea story thrown in too. Basically it tells the story of the summer after the series began, when Sarah and her family and friends want to return to a place in the park one last time before the mining begins; while at the same time, a wildlife biologist is investigating strange elk kills around the park perimeter. Everything comes to a head up in Bear Valley, deep in the park.

5. As the third book in the Strong Heart series, was it easier or more difficult to write than the others?

This did not start as a series. I wrote Strong Heart and thought I might be done, but the tale kept whispering to me, and so then Adrift appeared. I wrote Strong Heart after a seven-month voyage on a container ship. I came ashore, had a story in mind, and said to myself if you are serious about this get serious. So in the free time between gigs on ships, I attended writing courses at the University of Washington and started Strong Heart there. Then I went to Cleveland to work there a few months on setting up a shipping service there, in the Great Lakes, and in the evening and on weekends wrote Adrift. When that was done in 2014 (well, early drafts of it), I knew I had to wrap this up somehow, or maybe this could instead be a multi-volume series? Anyway, I went to Baltimore in early 2015 to serve on a ship there, and that's when and where I wrote the first half of Totem, thinking this would do it. But, clearly, there was more to say. For three years I worked on that third draft—titled Found, by the way—I even went to a cabin in Denali Park one late April in the snow and spent a week isolated editing and working on the tale. But then I began to think, now this is a series; the first two books are loved by those who read them, but I have not hit the big sales at all. Why do book after book if the series hasn't taken? But I also knew nothing outrages a reader more than starting a series that is not finished. And, I wanted to finish the story, the big tale, you know? Most of my readers, honestly, have been OnlineBookClub readers and reviewers, and many of them want to see the third book. I owe them. In late 2017, after Strong Heart was published by Irontwine Press, my wife and I moved to Tacoma, and I nearly gave all of it up; I was getting Adrift out in 2018 but thinking, why bother. I could write five books about the suffering as regards finding outlets, exposure, eyeballs on my titles. We moved to Tacoma, and in the fall of 2018, I began a fourth tale and wrote a long first draft. In the spring of 2019, I decided to combine them into one final third book of the series, which I have done. The first two are about 70,000 words each, and the third is almost 140,000. So it has taken me, really, five years to complete to my satisfaction. The whole general basis for this series—Can the old legends be true, that people have always been here on North America, as according to many if not most Native American and Canadian First Peoples tribes —began as a spark with me in 1990 as soon as I moved to Seattle. In 2010 I began doing hard research every week, so this series has required at least 11 years so far and some would say 31. I seem to be, if nothing else, persistent, in addition to being, now, old in the eyes of anyone under 50.

6. The title was originally to be Found. How did it change?

I never liked that title much; it was just a placeholder. It made some sense in that in the third book the answers were to be found, but when I added to the story and made it one long tale, I thought Totem made better sense.

7. What's the most difficult part of the writing process for you? What's the easiest?

For me, the way I have always written, I spend three or four months working four or five hours a day writing and then have a rough draft. Then it takes years, literally, to cut stuff away to make it right so only the words needed are left. It is hard to be patient with that, but it takes time to sink in, soak. Actually, I had Found edited by my editor Pete Wise years ago; it was 70,000 words going in, and when he handing it back to me it was 50,000, not enough for a good book in my view. So I pondered this and then added another entire plotline, interwoven with the others, and that was a lot of fun. I think it worked well. The easiest part, to me, of the process is actually the writing, letting it come, watching it unfold. The worst part of it is the other end of this, the promotion part, the self-promotion, the begging for attention.

8. Is there anything that was left out of the book that you can tell us about?

Actually, for Totem it seems things were added in—a new storyline about mysterious elk kills in the park—and then the entire second half of the final tale, titled in Totem: Book Two, The Unnamed Lake. So, really Totem is like getting two books in one, I guess.

How about a few more fun questions.

9. If you could be any fictional character, who would it be and why?

Frodo from Lord of the Rings. I have read that series four times, the first time when I was in college, 1966, freshman year. I was on the crew, and we all stayed on campus spring break to train, twice a day workouts. In between I picked up The Hobbit and then the other three books, and I disappeared from all life except eating, rowing, and reading, for the full two weeks.

11. What's the most annoying sound to you?

A zealot speaking.
A book is a dream you hold in your hands.
—Neil Gaiman
Latest Review: Blue Zeus by Carol J. Walker
Top
Post Reply
1 post • Page 1 of 1