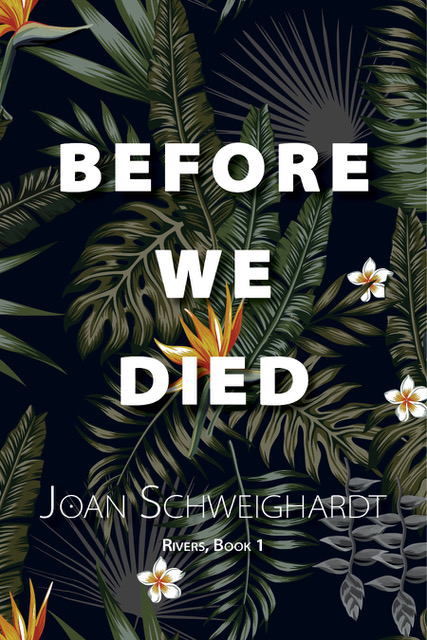 Today's Chat with Sarah features Joan Schweighardt author of Before We Died.

1. What do you do when you aren't writing?

When I’m not writing for anyone—myself or clients—I am reading, painting, hiking or hanging out with friends.

2. What's the most difficult part of the writing process?

I’ve been writing for so long that I could execute the craft element with my eyes closed. But craft, of course, is only a slice—albeit a big one—of the pie. The difficulty is making sure each story is as good as it can be. I do many drafts of each of the books I write. Then, when I think I’m done, I show them to a couple of brilliant colleagues and use their feedback to write a final draft—or more, if necessary.

3. Who's been your biggest inspiration as a writer?

I have been inspired by many writers, from Edgar Allan Poe when I was a kid, to Vladimir Nabakov and T.C. Lawrence in college, where I was a Lit major. I still love lavish prose, but these days I’m more interested in text that is comprehensive, less about flourish and more about getting the job done—T.C. Boyle and Ann Patchett come to mind. In addition to being inspired by writers, I am also inspired by places, architecture, legends, history, and juicy gossip.

I wanted to write a novel that could be partially set against the background of South America during the rubber boom. Since the boom lasted from 1879 to 1912, I had 33 years to choose from. I ultimately chose 1908 because I wanted to concentrate on events that unfolded toward the end of the boom.

5. One of the characters is Irish American who speaks as such. Are you Irish? If not, how did you get the dialogue and terms to be authentic?

My Irish American characters hail from Hoboken, NJ, which is right across the river from Manhattan. Jack Hopper, the narrator of Before We Died, is an early 20th century dockworker from a rough immigrant neighborhood. His language reflects the Irishisms he hears at home and the slang he picks up at the docks. I love to research, and I like to make my characters as authentic as possible. I got all my slang and Irishisms from books and from articles I found on the Internet. My own ancestors are Italian and Hungarian.

6. The book is an adventure two brothers have while trying to get in on the rubber boom. How did you make what otherwise might be a somewhat dry topic so exciting?

Actually, the rubber boom was a fascinating and rich moment in history. Because it was short lived, and because it happened in South America, most people have never heard of it. I never heard of it myself until a client I was working for, a book publisher, asked me to read a nonfiction book written by an actual early 20th century rubber tapper, so that I could write up a short summary for their website. That whet my appetite, and before long I was reading everything I could find about the rubber boom and the beautiful, dangerous South American rainforests it took place in, and the greedy rubber barons who enslaved indigenous tribes and made indentured servants out of foreigners who came to the area thinking they would get rich quick. My research became so important to me that I made two trips to South America, one to visit an indigenous tribe and one to travel the rivers on small boat with a private guide to get a feel for river travel and to see rubber trees. I have become a serious advocate for the Amazon rainforests, and while I don’t preach in my books, I’m hoping some readers will also ponder the impact the rubber boom had on the Amazon back in the early 20th century, and the impact today’s events in the Amazon are having on the world.

7. This is the first in a trilogy. Can you briefly discuss the other two books?

The three books (the second book, Gifts for the Dead, was just published, and the third should be out this time next year) collectively cover the years 1908 to 1929. They move back and forth between two continents and two groups of people: the Irish American contingent from New Jersey, and a mixed-race (indigenous Brazilian and European) group from Manaus, Brazil. These two groups are very different, but they are bound together by external circumstances. While the richness of the historical stuff (not only the rubber boom but the stuff going on in the U.S., including WWI, the Spanish Influenza, and the beginning of the Great Depression) speaks for itself, the characters’ interactions provide the love, greed, grief, betrayal, revenge, and redemption that keeps historical fiction from reading like a text book.

As mentioned above, I am working now on the third book in the trilogy, called River Aria. I have also just had my first kids’ book published, called No Time for Zebras, and I have contracted with that publisher to complete one more kids’ title. After that, I plan to work on a few nonfiction projects, one a book of essays about my sister, and one an anthology I hope to do with other writers.

9. Are you a cat person or a dog person?

I love all animals, but especially dogs. Big dogs. My last two were both rescue pups, Emma, a Shepherd mix, and Roy, a Boxer-Lab (boxador) mix. I am currently dog-less and hoping the right dog will find his or her way to me soon.

Coffee, second only to wine.

11. What's your favorite Holiday and why?

Thanksgiving, because it’s all about friends and food and gratitude.

12. What book are you currently reading?

I’m reading The Thirteenth Tale by Diane Setterfield. Her most recent novel, Once Upon a River, blew me away and now I can’t get enough of her.
A book is a dream you hold in your hands.
—Neil Gaiman
Latest Review: Blue Zeus by Carol J. Walker
Top

Thanks for this interview Kandscreeley and Joan for informing us about yourself. I think Joan loves sightseeing as well. I have read the review by Ritah and I am looking forward to catching up on the story in totality. Carrying out research so that you put together a good read shows that you are dedicated to your work and I applause for that.
Latest Review: Final Act by Van Fleisher
Top

Nice interview.Wow! she love dogs like me.
Latest Review: Spirit of the Season by Brian Lamont
Top
Post Reply
3 posts • Page 1 of 1