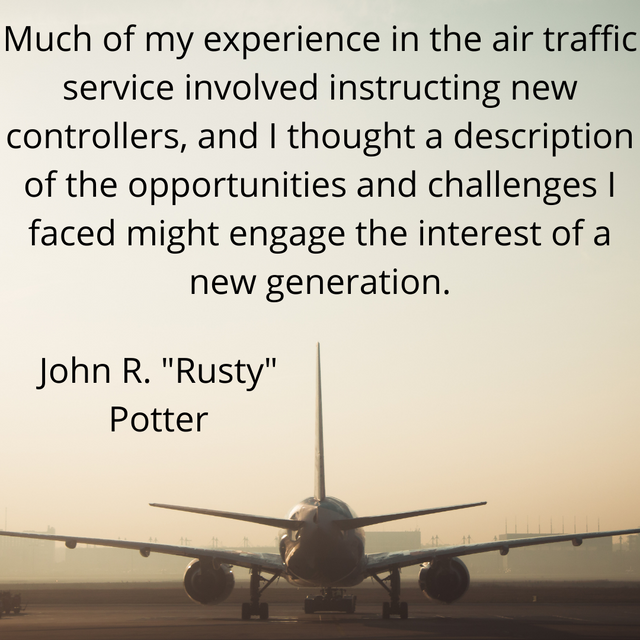 I grew up in Connecticut and attended public school through ninth grade, then completed secondary school at Exeter Academy. After graduating from Princeton with an AB degree I served a four-year tour with the Navy, then was hired by FAA at Miami International Airport control tower. Over the course of some 40 years, I amassed about 800 hours of pilot time, holding commercial and instrument pilot ratings.

2. How and when did you decide to turn your life into a memoir?

Towards the end of my career as an air traffic controller, I realized that I had a story to tell. Much of my experience in the air traffic service involved instructing new controllers, and I thought a description of the opportunities and challenges I faced might engage the interest of a new generation.

I remember reading The Making of a Surgeon, a New York Times bestseller, when I was a kid. It was interesting, entertaining, and hilarious, clearly written for lay readers. I hoped to do something similar with my story. During my time with FAA, I was frequently called on to write responses to communications from upper levels in the hierarchy and received enough kudos for these efforts to suggest I might be able to create a readable narrative. But during my time in the two high-powered educational institutions I attended, I received only average grades in writing courses. Maybe I was crazy for even considering an original work.

4. Let’s talk specifically about Cleared for Takeoff. Can you give us a little glimpse of the book for those who haven’t read it?

Sure. During my time in the Navy, I earned my pilot ratings, hoping for an airline pilot job. After a series of dead ends in this quest, I applied for the controller job. A good portion of the book is devoted to the steep climb of learning the job in the first place. I was the only new hire without prior controller experience ever to be trained at Miami Tower. I describe my setbacks, plateaus, and ultimate qualification in a big-time facility. Later I go into the nuts and bolts of everyday life in the controller’s chair including sharp exchanges with pilots, hairy events that turned out ok, and a few that didn’t. There is humor, some of which is at the expense of the government bureaucracy, and then a shorter portion about opportunities that came my way apart from controlling traffic.

5. What is the most difficult part of being an air traffic controller?

Initially, it is learning the job. If you have been in sales or marketing or been a teacher, those skills are transferable. There is nothing to prepare you for being a controller. Later, it comes down to three things: dealing with incomplete or incorrect information (e.g., erroneous pilot reports); frequency congestion (it would be great if you only transmitted an instruction once and the intended pilot responded correctly); bad weather, which essentially means all the airspace divisions and prescribed procedures are temporarily out the window, requiring a controller to find a safe route for each individual airplane instead of establishing a nicely orchestrated flow.

6. What was the most challenging aspect of writing your story?

7. What was the highlight of writing the book?

The input I got from friends and family. Without their encouragement, I might have given up.

8. What’s next? Are you promoting the book? Planning a sequel?

Well, there is no sequel, the story has been told. I have promoted the book through Linkedin, Twitter, and the Onlinebookclub. In the first months after publication, there were advertisements in Flying magazine and the Princeton Alumni Weekly. I am mulling the idea of a fictional work centered around flying and the control tower, but that is far more daunting than Cleared for Takeoff.

9. What is your favorite vacation spot?

10. What book are you reading right now?