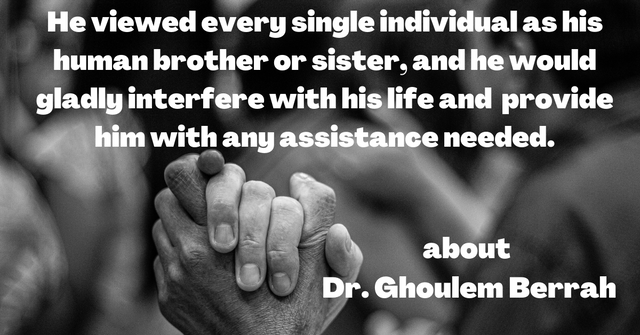 Today's Chat with Sarah features Dr. Ghoulem Berrah author of A Dream for Peace. I had the pleasure of speaking with the wife of the late Dr. Berrah.

1. For those that may not know about A Dream For Peace, can you give us a quick synopsis?

A Dream for Peace: An Ambassador Memoir is the story of a man who lived three lives in one life and who happened to be my beloved Husband Dr.Ghoulem Berrah.

Algerian medical student in Bordeaux, France, he turned into a warrior. While in the battlefield fighting for the independence of Algeria he was offered a Fulbright scholarship to study in the United States. After a major breakthrough in medical sciences regarding the selective inhibition of DNA, he earned a PHD, was elected member of the New York Academy of Sciences and appointed Professor of Virology at the University of Yale school of medicine. He resigned a couple of years later on a quest for peace around the globe and became a diplomat. As an Ambassador he spent most of his life being a steward for peace who favored behind the scenes diplomacy. His major accomplishment was to arrange in 1976 the first ever meeting between the ICIPP(Israeli Council for Israeli Palestinian Peace) led by General Peled and the PLO of Yasser Arafat represented by his senior adviser Dr. Isam Sartawi. A Dream For Peace is also a detailed account of an intricate love story. Finally, A Dream for Peace is the story of a devout Muslim married for forty years to a fervent Roman Catholic. He sowed seeds for cooperation and respect among people of all faiths. He met religious leaders of all faiths including Popes Paul VI and John Paul II.

He has woven his book in a delicately balanced oratorical sampling of episodes that chronicle his life journey. It’s a very well written book and well designed because each chapter is independent, no need to follow any order,;you just pick and choose a chapter according to your mood.

He wrote his memoir for the sake of the Dr. Ghoulem Berrah Foundation, an Interfaith Foundation and all proceeds go to the organization.

2. Why do you feel his life was worthy to be written about?

I think that his life was worthy to be written about because it’s a game changer. Most of us are locked into a box with all kinds of barriers. We are taught to think in such or such way, and we a have hard time getting out of our box. He had no human barriers, no religious barriers; he embraced all human beings. Covid-19 remind us that we are just one human race. In such a divided world he teaches how we can free ourselves from all chains, improve our lives and make the world a better place. Life is only worth to live fully, he thought.

3. It sounds like your husband did many fascinating things in his life. What was the highlight for him?

It’s difficult to answer this question but I will try to nail it down by saying that he had three highlights:
- To be a freedom fighter for the independence of Algeria
- To become a high profile scientist by achieving a major breakthrough regarding the selective inhibition of DNA and be the first scientist to ever give a hypothesis on the existence of an enzyme that was later identified by Professor Howard Temin as the Reverse Transcriptase which is a factor in enabling specific RNA viruses to induce certain forms of cancer or Aids.
-As a Diplomat
. To be able to arrange the first ever dialogue between the ICCIPP and the PlO
. To help switching to the United States the port of Berbera that was in the hands of the Russians for some time

4. Can you tell us one of your favorite memories of him?

My Husband was the most loving, caring and selfless person I have ever met. He viewed every single individual as his human brother or sister, and he would gladly interfere with his life and provide him with any assistance needed. Let me tell a story.

We were walking in a street of San Damiano, a small village of northern Italy, and we passed by a group of ladies chatting. All of the sudden he excuses himself: ”I will be back in 30 seconds”.

To my utter surprise I saw him moving close to one of the ladies who was smoking despite being pregnant: “I am a doctor, please throw this cigarette away. Your baby didn’t ask to come, you made that choice, don’t ruin his chance to be normal by inducing some brain damage." The lady abided immediately and threw the cigarette away and expressed her gratitude: “Thank you doctor”.

5. What do you want others to know most about your husband?

I would like people to grasp his unlimited love for human beings. As a steward for peace he would find a solution to any problem that occurred between individuals or nations. His pragmatism made him a “problem solver”. A man of deep faith, he always felt that he was on a mission; his mission on earth was ordained by a higher power. His disciplined engagement with his maker was carved into his soul and defined his humble nature. Those qualities propulsed him as a talented diplomat in global politics corridors.

He loved to laugh. His witty personality made people love to hang out with him. His unconditional sincerity and nobility make his book a true story because he didn’t hide his mistakes.

6. Who made the biggest impact on his life?

Although he had always in mind to please the Almighty in whatever he was doing, his relationship for 28 years with Félix Houphouët-Boigny, the first president of Côte d’Ivoire, a very wise man, was also influential.

7. What main theme or inspiration do you most want readers to learn after having read the book?

Be yourself, your uniqueness is valuable.

Push your limits as far as possible but don’t go beyond.

8. Why do you want others to pick up the book? If there a specific audience you would recommend it to?

I want others to pick up the book because it contains a wealth of wisdom and encouragement to live a happy and purposeful life despite obstacles that could occur. Although anyone can enjoy reading it, I would recommend it to youth.
Good books, like good friends, are few and chosen; the more select, the more enjoyable.
-Louisa May Alcott
Latest Review: Perilous Pills by Marilyn Beardsley Heise
Top
Post Reply
1 post • Page 1 of 1